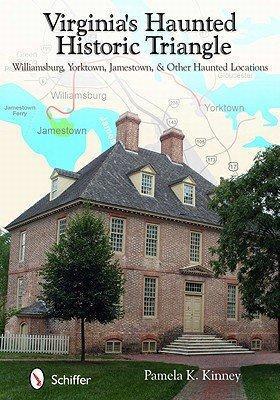 Take a step back into ghostly history as you tour Williamsburg, Yorktown, and Jamestown in the Historic Triangle. Visit Jamestown Island where Captain John Smith and the first English colonists settled. Stroll around Yorktown and follow the same footsteps of Thomas Jefferson and George Washington as they walked along Duke of Gloucester Street. Hear odd noises and see apparitions at the Peyton Randolph House, Cornwallis's Cave, Wells's Corner, Sherwood Forest, the Rosewell Plantation, and many, many other places. Be prepared to get to know the ghosts of this Historic Triangle and its surrounding areas. They're dying for you to read their stories.
Please welcome my guest blogger today, Pamela K. Kinney. Her new book is on the haunted regions of Virginia, and she has graciously written a blog post today about ghosts -- a topic that has fascinated mankind for millennia. She has also provided us with a glimpse into the past with an excerpt from her book.

Things That Go Bump in the Night, or the Ghosts That Haunt Us

Today, people are interested in the paranormal. Thanks to TV shows like X-Files, Ghost hunters, and many other paranormal reality shows and shows on true ghost stories, many are trooping out to form paranormal investigating groups to learn more about the specters that haunt our world. Even those who are not participating in “ghost hunting” for real are interested in “life after death.” In the mortal world, with so many worries of economy and day-to-day troubles, maybe some proof, no mater how small, shows us the next world after death will not be so bad. I know for me, it’s a sort of comfort food as for many others. Whoever thought something Halloween scary and goes bump in the night would be something that gives comfort to those alive?

Ghost comes from the Old English gást, which in turn, came from Common Germanic term, gaistaz. The pre-Germanic form was ghoisdo-s, denoting "fury, anger" reflected in Old Norse geisa "to rage." In Germanic paganism, "Germanic Mercury," and the later Odin, was at the same time the conductor of the dead and the "lord of fury" leading the Wild Hunt. The Old English word is used as a synonym of Latin spiritus meaning "breath, blast" from the earliest attestations (9th century). It could also denote any good or evil spirit, like angels and demons. The Anglo-Saxon gospel refers to the demonic possession of Matthew 12:43 as se unclæna gast.

The synonym spook is a Dutch loanword, akin to Low German spôk (of uncertain etymology); it entered the English language via the United States in the 19th century. Alternative words in modern usage include spectre (from Latin spectrum), the Scottish wraith (of obscure origin), phantom (via French ultimately from Greek phantasma, and apparition. The term shade in classical mythology translates Greek σκιά, or Latin umbra, in reference to the notion of spirits in the Greek underworld. "Haint" is a synonym for ghost used in regional English of the southern United The term poltergeist is a German word, literally a "noisy ghost," for a spirit said to manifest itself by invisibly moving and influencing objects. And revenant means a deceased person returning from the dead to haunt the living, either as a disembodied ghost or alternatively as an animated ("undead") corpse. There’s also the fetch—the visible ghost or spirit of a person yet alive. This can be from astral projection, or even something else.

In traditional belief, a ghost is the soul or spirit of a deceased person or animal that can appear, in visible form or other manifestation, to the living. Descriptions of the apparitions vary widely: manifestations range from an invisible presence to translucent or wispy or orbs (anthropologists link this idea to early beliefs that ghosts were the person within the person (the person's spirit), most noticeable in ancient cultures as a person's breath, which upon exhaling in colder climates appears visibly as a white mist), to realistic, life-like visions. The deliberate attempt to contact the spirit of a deceased person is known as necromancy, or in spiritualism as a séance.

Belief in manifestations of the phantoms of the dead dates back to animism or ancestor worship in pre-literate cultures. Certain religious practices—funeral rites, exorcisms, and some practices of spiritualism and ritual magic—are specifically designed to appease the spirits of the dead. Ghosts have been described as solitary essences that haunt particular locations, objects, or people they were associated with in life. There are other accounts of crowds of apparitions and orbs, phantom armies, ghost trains, phantom ships, and even ghost animals. There are three types of hauntings; they are intelligent, non-human, and residuals. Intelligent is the ghost that communicates with you, answers your direct questions on EVPs or through Franks’ Box. Non-human are elementals or demonic or angelic in nature. Residuals are like recordings, something out of a time warp, that repeats over and over, or at a certain date and time even.

It appears then that ghosts have been with us a long while in our history. We took their ectoplasmic beings to heart, telling legends with them starring in them, true paranormal events that happen to us, and they are the focus of scary horror novels or movies like The Haunting of Hill House by Shirley Jackson and Paranormal Activity. There are cartoons that have spirits in them, even one about a little ghost, Casper. The term even has come to means those humans who are spies who can appear and disappear easily, like after killing someone. The word is intertwined in our society. And really, is that so bad? I don’t think so.

Ghosts are the focus of my nonfiction ghost books (and sometimes my fiction too). I have a new book, Virginia's Haunted Historic Triangle: Williamsburg, Yorktown, Jamestown, and Other Haunted Locations, that was released by Schiffer Publishing on July 28th. For sale at their webstore, it will soon be available on Amazon, Barnes and Noble (both online and in store), Books A Million online, Indiebound.org (and in indie bookstores), and many, many other online and in store places. If not in your bookstore, you can order it from them. It has 121 color photographs, is a trade paperback, and 192 pages.

A chapter from the book: Chowning’s Tavern:

Josiah Chowning opened his tavern in 1766. He wanted to appeal to the ordinary people.

Located on Duke of Gloucester Street next to Market Square and the Courthouse, the tavern allows casual attire and no reservations are necessary. Instead seating is based on space availability. There are ales and specialty alcoholic drinks that you can order besides fountain drinks and water; and besides sandwiches, light fare, stews, and desserts.
But there are more than sandwiches at this tavern. There are specters haunting within these walls. Things of an unusual nature take place at Chowning's Tavern: furniture moving around, clothing of tourists being yanked on, and a little girl who appears and disappears.

Bill and I arrived early for the ghost tour to start, so we stopped at Chowning’s for root beer. Seated by the window, we watched a magician who came into the dining room to perform. I took a couple of photos of him. In one of them, I discovered what looked like an orb starting to form behind his head. Is this the ghost that uses the tavern for his stomping grounds?

Seven years ago, a woman was eating when the server approached her table, asking if she needed anything more. The woman looked at him and said, “I’m psychic. Did you know this tavern was haunted?” She gestured to the side. “Seems Peter told me he’s the one haunting it and he is very, very fond of a hostess named Emily that you have working here.”
When Lee, the server, admitted they had an Emily that worked as a hostess there, he went to get her, as the psychic directed. The woman stood with him at the table, not sure what was going on.

The psychic looked up at Emily. She told her that a spirit named Peter who haunted the place liked her. That he felt he was the protector of her and her newly born son who came too soon.

This did bother Emily that the woman knew about her son who had been born a preemie. She glanced aside at Lee, but Lee told her he never said a thing to the woman.

“I don’t know how you knew about my baby, but I don’t believe in ghosts,” Emily said. “I am not buying the Peter story.”

The woman smiled and said that was too bad as Peter really liked her. He even brought her a white flower yesterday.

Emily turned white as the flower. For when she had been seating some people in the gardens, she found a white magnolia blossom at her feet that hadn’t been there earlier. The thing about this is the nearest magnolia bush was two blocks away, by the Peyton Randolph house. No way for it to come from any flowering bush nearby—at least not on its own.
The day after meeting the psychic, Emily quit.

It goes to show that a woman can have a male stalker—even if he is a ghost of a man from the eighteenth century!

The next time you need someplace to sit and relax, why not have a drink at Chowning’s. Let it be known, though, if you find a white flower at your feet . . . you may be the object of some phantom’s affections!

Be prepared to take a journey into Pamela K. Kinney's fantastic dreams of horror, science fiction and fantasy, plus the ghosts and legends of nonfiction ghost books, Haunted Richmond, Virginia, Haunted Virginia: Legends, Myths and True Tales and soon to be released Virginia's Haunted Historic Triangle: Williamsburg, Yorktown, Jamestown, and Other Haunted Locations.

Author Bio
Pamela K. Kinney is a published author of horror, science fiction, fantasy, and poetry, along with nonfiction ghost books published by Schiffer Publishing. Her first two ghost books were nominated for the Library of Virginia Award.

She admits she can always be found at her desk and on her computer, writing. And yes, the house, husband, and even the cats sometimes suffer for it!

Find out more about her at: http://FantasticDreams.50megs.com and at http://www.SapphirePhelan.com for Sapphire Phelan.

I will be buying this book for sure Pamela. I live in Williamsburg and my son used to work there and has some stories of his own to tell! This blog is really interesting!

I will be posting a review of the book in a few days, Jinny, if you want to check back. I am SO looking forward to reading it!