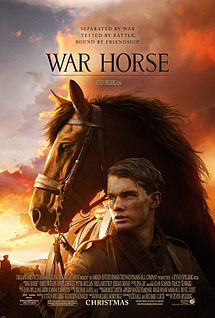 If you have a chance and are at all considering it, you should view War Horse on the big screen first—this from someone who very seldom gets to movies in the theater and usually waits till they hit DVDs. But trust me—the impact of this movie is orders of magnitude greater when stretching out before you on a theater screen and heard over the theater sound system: the beautiful panoramas of English countryside, the pastoral French fields outside the range of battle … the drama and horror of the battlefields themselves, the thunder of hoofs and guns … even—particularly—the sounds of horses breathing. Particularly compelling are the cavalry charge early on and the grim desolation of the muddy hills up which the horses must pull the heavy German guns—and, of course, the utter horror of No Man’s Land between the British and German lines. Read More