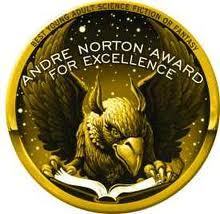 The Norton Award, which recognizes outstanding young adult science fiction or fantasy, offers an opportunity for readers to discover some great reading. Many of the other bloggers on this tour will tell you about the latest and greatest they know of in YA fiction, but I'm going to do something a little different.

As today’s blogger on the Norton Blog Tour, I’m talking not just about some books that impressed me and set me on the path of a writer (we're talking decades ago, here, folks), but also about the inspiration that Andre was to me personally—in both indirect and direct ways. It’s important, you see, never to underestimate the influence and power of a storyteller, and Andre herself excelled not just in her desire to help new writers but also in her ability to craft stories that not only touched her readers, but stirred their cores in ways that would stay with them for years.

The first tales bordering on fantasy that I can remember being exposed to were Grimm’s fairy tales—in the original German. As it happened, my big brother spoke German and would translate them to me as he read them. I was maybe four years old and couldn’t even read yet, and I couldn’t get enough of them.

The magic fascinated me. The notion that things could happen outside the ordinary events and abilities of everyday life that could change a peasant’s—or princess’s—life forever was both enticing and fearsome, and enthralled me in a way that “ordinary” kids’ stories of the time just didn’t. Although of course I read them too, once I learned how to read: Judy Bolton, Nancy Drew, the Dana Girls (okay, I’m dating myself), the Hardy Boys (So I was a girl and I liked boys’ stories. So what?) and, last but far from least, Tom Corbett, Space Cadet, whose adventures made me look at space as someplace I might be able to go myself some day. Hey, it was the fifties, and anything was possible! Between the brothers Grimm and Tom and his buddies Roger and Astro, I was off and running, figuratively speaking.

Then came a kids’ book of retellings of myths and legends that, I learned when I was older, actually contained the bare bones of some of the world’s greatest epics: Beowulf (still my favorite after all these years), Roland, Sigurd of the Volsungs and Fafnir the dragon, Rustam and Sohrab all became my dearest companions as I pored over their stories. I loved the tales so much that I would go on later to study the epics themselves in college. I am ashamed to say that I do not know the name of the author who so early on fascinated me with distillations of the heroic doings in some of the world’s greatest tales.

Next there was Hans Christian Andersen, whose work delights me to this day—and whose tales I first read in an old book that had lost its covers long before I came on the scene. Again, magic called to me from its pages.

Two more books stand out in my memory. The first was an old book of fairy tales from Eastern Europe found on a library shelf; the tales impressed me with their cruelty and gore (like the unexpurgated Grimm stories). The second was a wonderful book of nautical ghost stories “for young people” collected by Robert Arthur, called Davy Jones’ Haunted Locker. It introduced me to some great writers of the supernatural, and included a number of tales that most definitely were not originally written for children. My own first attempt at publication was set on the high seas as a result—but with a supernatural twist, of course.

Ironically, I began to read “real” science fiction—the likes of Clarke and Heinlein, Asimov and Weinbaum, Matheson and Sturgeon, Bradbury and Williamson—before I discovered that there were science fiction and fantasy books marketed toward younger people.

But then I discovered Andre Norton. I think I was in my twenties by then. Year of the Unicorn was the first book of hers that I read, and from then on I couldn’t get enough. Her heroines were gutsy girls and women who didn’t stand around waiting to be rescued; her plots drew me in; and her talent for making the reader feel a part of the story was exceptional.

In one of her Witch World novels she dealt with a character who had temporarily lost the telepathic ability to communicate and become “headblind.” By the time I was done with the book I felt headblind myself, because telepathic communication had been so much a part of the book that I felt an actual loss at not being able to do it. In another, the female protagonist was imprisoned and preparing for escape by doing daily strengthening exercises, so that when she eventually managed to win her freedom she would have the strength and endurance to get away from her captors. No shrinking violets these!

Many of Andre’s books were marketed toward young people, but one thing that highlighted them was that none ever “talked down” to the reader—something a lot of kids’ books could be guilty of. And Andre's were equally attractive to adults.

Some years later I would also discover Diana Wynne Jones, another author whose books might have been targeted toward younger readers but whose plot complexities and characterizations were far from childish. Her Fire and Hemlock delighted me no end; the weaving of myth and reality into sheer magic for the reader was so entrancing that I was surprised later to find that the author’s books were considered YA. Later I would stumble on Philip Pullman’s “His Dark Materials” series, another set of books that provided as much intrigue and danger as any books written for adults.

Sherwood Smith says that Andre’s original idea for what has become the Norton Award was to single out an unpublished work for recognition, to give it a boost. She never tired of trying to help other writers, and her previous venture to distinguish worthy unpublished manuscripts—this one restricted to women writers—was the sadly short-lived Gryphon Award, which I am very proud to have won in 1990.

Andre herself was unutterably kind and supportive, an enthusiastic supporter of my work, and a warm friend. I am so honored to have known her, and have always been extremely impressed with how devoted she was to good storytelling—not just her own, but others’. One day she called, very excited, to tell me about a new book she’d read and urge me to read it myself. It was Harry Potter and the Sorcerer’s Stone.

The authors of YA fiction, past and present, deserve recognition and respect for the fine work they do. It is thanks to Andre and authors like her, all the writers who have gone before, laying the groundwork in creativity and skill to offer younger readers fuel for their imagination, that there are far more offerings today in excellent YA fiction than were available when I was young.

I have a Norton-eligible book myself this year, for the first time: The Trail Through the Mist sends two teens back in time to the Trail of Tears, where they must risk everything to save a young Cherokee girl and the U.S. Cavalry officer who loves her. If they fail, the consequences will ring through generations.